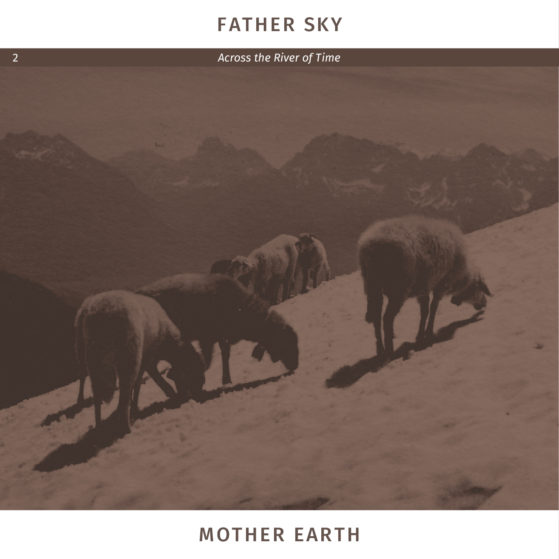 Across the River of Time

The next phase of Father Sky Mother Earth has begun. With the introduction of our first picture theme, we also gave music a new image; A more vivid and colourful one than on the debut album. The soundscape is natural but gives the listener a hard and unsettling embrace of psychedelic heart-hitting drones. Its nuances resonate in the mountain scenery that holds us as their residents. These sheep – as a metaphor to this – live here from generations on and try to survive in a stone-cold exile. We are all waiting for The Return of Alhazred to weigh our souls. When we meet face-to-face stories will be told as we’re floating Across the River of Time.

If we look back have you been happy with your life, did you live?
Did you reach the final state of consciousness and went beyond?
Are you ready to let yourself go and be an echo to this world?

„The intense power that emanates from its insidious, perfidious, densely vast, exponentially rude and ecstatic – but at the same time beautiful – melodies makes this record a highlight of the genre.“
– www.merchantsofair.com

„This is about you and the music, if you sit alone it will reward you with insights. If you are in a group don’t talk, let this brooding sonic palette paint a picture in your mind, let it dredge the dark corners and reveal previously undiscovered recesses. But do it safely.
[…] I’m not sure if the following makes sense, but this is superior drone. Its something that really will grab you and, while it requires an investment of time and attention from the listener, it will repay that many times over. So if you’re put off by words like ‘drone’ and ‘doom’, don’t be, alternatively if those things are your thing this is going to be one of your key albums of the year.“
– www.psychinsightmusic.com

Released April 2, 2017 on bandcamp
Recorded during December 2016 and January 2017
Mixed by Father Sky Mother Earth in March 2017
Thank you for listening and your support!
FSME002D – Digital
FSME002CA01W – Cassette